Tips for Running in Costume - things you might not have though of...

I’m sure that if you’re looking at this, you’ve probably thinking of, or have already committed to… the crazy idea of running a race in costume!  A daunting task and not to be taken lightly!  Fortunately, if you’re well prepared, it’s entirely possible, and you don’t have to be Mo Farah to do it!  With a bit of determination and a decent level of fitness, you spur yourself on, even if you haven’t been running all that long.

Now I can’t claim to be a proper expert, or a top runner, I’m certainly not going for world records, I’ve only done a few races in one costume, and I’ve done four marathons in total since taken up running 3 years ago, i’m not running ultras every week…!   But I think if you’re reading this, you’re probably in the same boat.  My last big costume race was the 2018 London Marathon (the hottest on record!), in a massive inflatable T-Rex costume!  And yes, the heat caused big problems, the costume had issues, my water pack broke, I was well short of peak fitness… but I got through it, through good preparation.  There will always be problems, but hopefully some of these tips will alleviate them to a manageable level.  Ready?  OK, let’s start.

1 – Get some practice in

I don’t mean your normal training…. That’s a gimme.  Get your costume on!  Getting some practice runs in your costume is the number 1 tip here.

You want to me run round the streets with my costume on?!  If you like… I probably wouldn’t…  What I mean is, get out to an organised race, and start with a short one.  Your best bet is a parkrun.

Honestly, parkruns are fantastic.  One, it’s free.  Two, it’s a fairly short distance (5k).  Three, it’s near you and on every Saturday.  Four, it’s a great friendly atmosphere and five, it’s a brilliant way to kickstart your fundraising, which is usually why you would want to run in costume in the first place.

I spent a good six months trying to build an online following for my T-Rex efforts.  But it wasn’t until I got out to my first parkrun that I started getting notice.  Almost immediately, I was picked up on twitter, mentioned in the parkrun report, and found by the local press.  Soon enough, people actually started becoming aware of when I was doing my next parkrun, would know who I am and would come up and say hello.  Soon after that, the donations started rolling in.  Yes it takes some guts, I’m not an extrovert, turning up on the morning of the first one… I almost bottled it.  By the end I was hooked.

As I said, this might seem an obvious tip… but it’s super important.  Afterall, I can tell you about all the problems I had and how to get round them, but once you’re in your costume… they might be that relevant, you’ll have your own problems, and only you can determine what they are!

I would do a few and build up.  Every race tended to bring about some slight modification.  Do a few parkruns as a starter.  If you’re going for a full marathon, build up and do a 10k, maybe even a half marathon (just not the one I did…, run through the woods on a monsoon of a day, with deep deep mud and low hanging trees (in a 7ft tall costume).  Hopefully your costume is a bit more human sized!

The tips are in no particular order from here on, but running in the heat is pretty important, depending on your costume.  I’m obviously a little bit biased towards running in a big inflatable all encompassing dinosaur… your costume might be something a little lighter and less restrictive, either way, for 95% of costumes, it’s probably going to get hotter than usual.

This can be tricky to achieve, after all, a lot of marathons if you’re in the UK like me, are in the spring.  Months and months of cold weather training and then all of a sudden, heatwave out of nowhere!  But that doesn’t mean you can’t layer up with excess clothing to work up a bit more of a sweat than usual.  And even if you’re planning to your costume run in the winter, don’t think it won’t get hot pretty quickly into your run.

Bonus tip, you could part with a small amount of cash and get yourself an icepack vest.  Wish I’d though of that before…

3 – Be prepared to hydrate – get a water backpack.

Can’t I just visit the water stations more often?  Well, yes… again this is really costume dependant.  If you’re running in a costume which will restrict your arm movements, or cover your face, anything which will basically make it very difficult to drink without either stopping or taking part of the costume off, you’re going to want a backup plan.

That very plan, is to get a backpack which can contain a water tank/bladder, with a lovely little water tube over your shoulder.  Search something along the lines of “hydration pack” for one of these.  A lot of people swear by CamelBak, which are excellent, and there are plenty of alternatives.  Chances are you may need to carry a few other things so get something which functions as a backpack, not just a water container.

Again, practice with this.  If you’ve never run with a backpack over a considerable difference, it’s different.  For me, it’s a bit of a neck and a back killer and takes some getting used to.  Fortunately, I’m able to run to commute to work, so I’ve got to carry laptop, shoes, clothes, lunch… in a nice heavy backpack.  Not saying that you need to do the same, but if you’re going to use a water backpack in a race, then make sure test it.

The tube is particularly important, especially if you’re going to have to work hands free.  Don’t make the mistake I did, and accidentally bite the end of the tube off during the race.  Spurting water inside an enclosed costume with an electric fan, after 7 miles of the hottest London Marathon on record, was not ideal.  Needless to say, someone in Greenwich probably picked up my water bladder disposed on the side of the road.  Don’t get the cheapest, get the best one.

Extra bonus tip, put your water bladder in the freezer before the race!

Right!  This article has gone on for longer than intended… so… I’m going to split it into several parts.  Part two will be on the way soon!

Thanks for reading, and best of luck!

One last thing, the point of this article is genuinely intended to be informative and useful to all readers.  Of course, the benefit to us is, people coming onto our website and learning about Rundraise.  And I should also disclose, I have included a few links to products under an affiliate program.  This means, if you buy the products using the links in the article, Rundraise will earn a small % of the purchase, which we can use to generate money for charity, and to put more races on.  But i’d also like to point out, I’m not including any old product, I’ve purposefully listed products that I’ve either used myself, have had recommended to me, or, ones that are the highest rated on Amazon.  Hope you don’t mind. 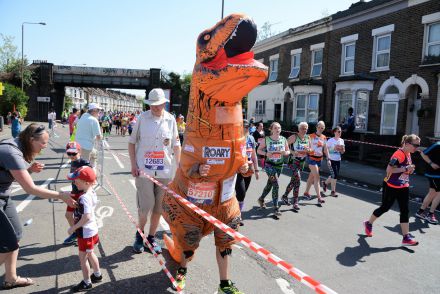 A hydration pack is a must for any big, hot and enclosed costume!

An ice vest could keep you nice and cool...